The timeless Dave Barry commented on the ability of some people to say exactly the opposite of the truth.

It turns out Twitter is the same. Lately, the phrase “You can’t make this stuff up” has been getting a lot of air time and, in many instances is attached to a “fact” that is 100% made up. Not only that, it is often attached to ideas that are the very first thing you’d make up in order to slander someone. Take, for example, this tweet

Now, Reggie is a constant critic of the interim Ukrainian government. On this point, the two of us disagree. This is neither here nor there. The point is that, for someone like Reggie, who loathes both the Ukrainian interim government and President Obama, it’s absolute child’s play to invent the idea that Obama is arming the Ukrainian “Nazis”. I’d be shocked if this weren’t the first thing that came to his mind. To briefly lay out just a few facts, the Obama administration has, so far, resisted pressure from Congressional Republicans to arm Ukraine and while there are neo-Nazi elements who participated in the overthrow of Yanukovich, it’s hard to make a case that they’re a dominant influence. (For my thoughts on the GOP’s ham-handed, amnesiac approach to Ukraine feel free to check out this recent post.)

I was involved in another conversation on Twitter in which I questioned the source of a quote allegedly by Nancy Pelosi. @LriHendry claimed that Nancy Pelosi said (Lori’s quotation marks, not mine) “Employees cutting hours is a good thing. It gives that person time to pursue dreams and passions.” It was followed by Lori’s personal comment, “Yes. She really said that!” Now, that didn’t seem like something likely to be said by anyone who ever wanted to be elected again, so I googled a little, came up empty, then replied, “No. She didn’t. You can’t just make stuff up.” To which Lori responded (like you knew she would)

After some time, Lori gave up her search for a source of this quote, which, I think, is a misreading of an interview of former Speaker Pelosi by Candy Crowley.

“You can’t make this stuff up” is becoming the go-to conservative defense in response to fact-checking. It’s like the bogus posts that used to circulate social media complete with a link to snopes.com with an anchor like, “Snopes has already confirmed this is real!” But the real question is, at what level do the posters, tweeters and pinners know they’re being deceitful and when are they guilty of mere credulity.

This final example is by far the best and here the line between deceiver and deceived is quite blurry. Another invented Nancy Pelosi quote, circulates Pinterist, Facebook and Twitter and says something like this: 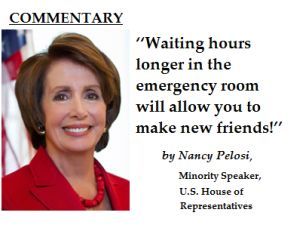 Recently on Twitter, @ConservPSTeacher tweeted this link and added

CAN’T MAKE THIS UP! TOP DEM DIMWIT. I wonder how many “friends” she makes waiting in waiting rooms? http://t.co/VZ0H9Oahkf

The quote is, of course, made up. It turns out it originates on a conservative satire website which likens itself to the Right-leaning version of the Onion. The best part about this example is that, in the Pinterist link, the picture shown is pinned from the very Politifact article which debunks the quote!

And so, I think it’s appropriate to book-end this post with Dave Barry quotes. This one is from the same article above and perhaps explains why Republicans are turning to fabrication to forward their political goals.

The most powerful force in the universe is gossip.

You see, each of the ideas above are viral sensations. It only takes an ignorant second to repost them to your equally gullible friends and followers who desperately want to believe what you’ve told them. But no one who’s not a major news outlet (and not even all of those) discovers they’ve posted an erroneous non-fact and issues a correction. That would be a lot of effort and embarrassment. And even if they did, the correction is much less fun to retweet that the salacious original. And so they slosh around the internet and land periodically in your inbox and twitter feed. Mark my words, one of these days you’ll open your email to read