As I take aim at Friedrich Hayek, on a site called thisweekinstupid, I do it with some trepidation. Hayek was a well-spoken, skilled and innovative economist. That doesn’t mean he didn’t occasionally get it wrong. And in the unfortunate case I’ll discuss today, Hayek is found contributing to a potent and damaging piece of stupid that characterized much of the late 20th century–the cult of the invisible hand.

Pros and cons of spontaneous order

In the 1950s natural sciences like physics and especially biology began to notice that large systems made from simple parts could work together to create surprising and miraculous results. The brain is the most exciting example of this. Although some neurologists will likely disagree, the dynamics of a single neuron are simple. On receiving a pulse of energy from a nearby neuron through its dendrites, it sends a pulse to other neurons through its axon. This pulse is then received by the dendrites of other neurons. No one would look at that simple system and guess that a collection of those interactions would produce human thought. That miracle of complex macrodynamics from a multiplicity of simple microsystems is what Hayek called “spontaneous order.” Hayek and others believed fervently in the power of spontaneous order to improve people’s lives. Hayek called it a “fatal conceit” to imagine that a designed system could match a spontaneously ordered system for efficiency.

During the Goldwater/Reagan revolution, this became the justification for opposing government economic interference in almost any form. Any top-down tweaking by government moves the economy away from the spontaneous order, which is assumed to be the most efficient possible. It was also a convenient defense against the primary ideological foe of the United States–the Soviet Union. To those of the Austrian school, the economic failure of the Soviet Union was definitive proof of Hayek’s idea.

But on closer examination, the assumption that spontaneous order is always elegant or beneficial seems to come from nowhere, and certainly not from any of the natural sciences. As we look at other examples, we find spontaneous order is, indeed, powerful. But sometimes spontaneous order can be fatal. A herd of cattle can be thought of as a complex system made of simple parts. We could describe the behavior of cows quite simply: Move toward grass; avoid obstacles. But, spurred by the wrong external stimulus, those simple dynamics can cause a stampede as one cow starts to run enticing others to run to get out of its way. Here, the order that arises spontaneously is certainly unexpected in that it does not follow in a straightforward way from the micro behavior. In this, a herd of cattle is like a snowflake or a brain or an ecosystem. But in the case of cows, the macro behavior is not beneficial. Although the microdynamics were about avoiding injury, the resulting stampede can cause cattle to be trampled and killed.

So, which kind of spontaneous order is our modern economy? Here’s modern-day libertarian John Stossel extolling spontaneous order and its wisdom in leading America away from transportation by train in favor of cars.

At last month’s State of the Union, President Obama said America needs more passenger trains. How does he know? For years, politicians promised that more of us will want to commute by train, but it doesn’t happen. People like their cars. Some subsidized trains cost so much per commuter that it would be cheaper to buy them taxi rides.

The grand schemes of the politicians fail and fail again.

By contrast, the private sector, despite harassment from government, gives us better stuff for less money—without central planning. It’s called a spontaneous order.

Cars may be the right answer for many communities, but transportation innovations can be a very clear example of the failure of spontaneous order. That is to say, the order arises, it’s just not helpful. Examine the problem of electric cars. My conservative friends have posted pictures to Twitter and Facebook of four or five completely unused car charging stations, usually at government buildings. “Typical government waste,” they’ll say.

For some other examples of the inefficiencies of spontaneously ordered system, check out my post on public goods.

Consider this ball rolling on an odd-shaped surface. 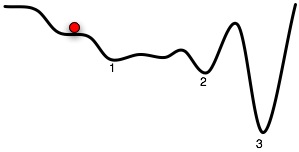 The lowest potential energy configuration for the ball–the place it “wants” to be–is at the bottom of the valley marked 3, but in some places on the curve, point 2 for example, the ball sees a hill on either side. It’s in a “stable equilibrium.” If I want to move the ball to the true lowest energy state, it needs a push up the hill. It needs to be moved toward higher energy in order to find a better state.

Our electric car economy is the same (or might be). The economy of transportation is sitting at point 2. Everyone’s myopic view tells them unilateral action is wasteful. Charging stations installed at libraries and government buildings are an attempt to push us up the hill to see if we’ll fall into a better global minimum. It looks like “typical government waste” because we’re not looking at the whole curve. All we see is the hill in from of us. It might work or it might not. Only a global view could hope to predict. But only a fool concludes that the order found organically is always best. In game theory, this kind of stable, non-optimal state is called a Nash equilibrium after John Forbes Nash, Jr. profiled in A Beautiful Mind.

Simulating large systems is what I do for a living. Hayek didn’t have the benefit of huge supercomputers to predict what complex systems will do, but from my experience, assembling a system of millions of interacting parts, turning it on and expecting it to organize itself into an optimal configuration in a reasonable time without any help from me is insanity. When we want to optimize complex systems like static fluid flows or magnetic materials, we have to nudge them to pop them out of local minima or steer them speedily through what would otherwise be a slow spiral toward optimality. We try solving pieces of the problem independently, then stitching them together. Sometimes we reset things to an alternate starting configuration and see if that leads to a better place. (The economic implications of that should keep wealthy capitalists up nights). From where I sit, to expect something as complex as a national economy to optimize its resources without any help demonstrates profound ignorance of the dynamics of complex systems.

We should neither discount the power of spontaneous order, nor place unwarranted faith in it. That’d be stupid.